“We cannot ignore this tale. It is a legacy we ought to be sharing with our children…
Such is the power of good theatre done well.”

Romanza is privileged to bring the extraordinary talent, Tim Marriott, and his production Mengele to Festivale 2020.  Marriott, a UK citizen, is best known for seven series of BBC TV’s leisure center sitcom, The Brittas Empire, appearing in every episode as deputy manager, Gavin.  Other TV credits include Allo Allo, Doctors, The Bill, An Actor’s Life for me and many others.  His film credits include the forthcoming features:  The Real Thing, Love Type D and Revelation.

His play, Mengele, which he authored and in which he stars, imagines the notorious doctor of Auschwitz on the beach where he drowned while taking his morning swim in 1979, where he is confronted by the person that he thinks has saved him.  Flattered by this enigmatic presence, he attempts to justify his past and in doing so echoes the rhetoric of the present.  Director Tim Marriott says:  “We seem to be living in a time where anger and outrage are the common currency, and hatred and racism seem once more to be on the rise.”  …Auschwitz survivor Lydia Tischler’s words seem particularly apt: ‘The important thing is to remember so that this does not happen again for the potential for destructiveness is in all of us.”

Mr. Marriott’s production of Mengele was sold out for the entire duration of the Fringe Festival 2019 in Edinburgh, Scotland.  The Fringe Review said:  “We cannot ignore this tale and it is a legacy we ought to be sharing with our children…It scared me.  Such is the power of good theatre done well.”

Get your reservation before April 1
The Official 40-page Program Book is being built right now.
It still has room for YOUR ad.
25,000 copies will be printed in April. And the digital version will go online then and remain online like the ones below! 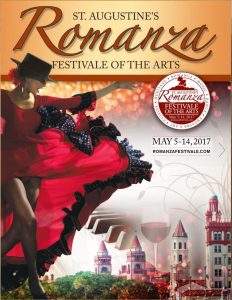 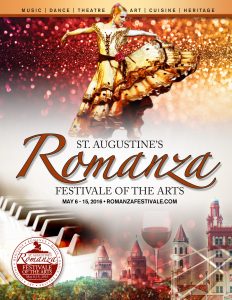 This message is only visible to admins.

Error: An access token is required to request this resource.
Type: OAuthException
Solution: See here for how to solve this error

St. Augustine‘s Romanza
Festivale of the Arts
is funded in part by
State of Florida, Department of State,
Division of Cultural Affairs,
and
Florida Council on Arts and Culture

St. Augustine‘s Romanza
Festivale of the Arts
is also funded in part by proceeds from Romanza’s own
St. Augustine Celtic Music & Heritage Festival,

St. Augustine‘s Romanza
Festivale of the Arts
is 10 Amazing Days in May.
See what’s happening all year long in St. Augustine Arts, Culture and Heritage
at HistoricCoastCulture